Daniely GARCIA was born in a small town in Venezuela called Valera. When she was twelve years old, she cycled as a hobby but within a few years she became a member of the national team. Now 36 years old, Daniely has nineteen years of experience. She is a multiple national champion in time trial, road racing and track. She has represented her country in many international games including 2008 and 2012 Olympics. She also has won several bike races in the USA and is a great addition to the team.

Married and with a son Anthuan she resides in Venezuela to this day.

She is a very friendly person who loves cooking and spending with family going to the movies. 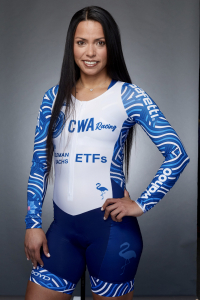